What can sometimes pass, at the conjunction of distinct materials say, Atlantic triton, brass, copal resin, beeswax, rose, fingernails, reclaimed wood, and lacquered board; or an IBM #95925 clock, urethane resin, rubber, imitation Calvin Klein Eternity cologne, akoya pearl oysters, vinyl, frosted glass, erased photographs, and pigment  is an encounter which suggests a cultural understanding resonates between them. So thoroughly can these experiences lodge themselves in the mind that they appear to, for a moment, transmute the senses into an innate poesy or art , that, as if by virtue of sight alone, these queer objects had been composed. We haven’t much respect for this slightofhand anymore, beleaguering our experiences with concrete typologies and a deeply impoverished position by which to know them  and not the least related, the intractable facts of sociality and economics, which can make life feel wholly contingent to use. Laugh, fine, a better way to be; it’s a question of reading, being a reader, and being read. We would lose much were it not for this sometimes pathetic subjectivity, that to perceive and interpret without claim, being a reader maintains and liberates by a certain mystery of cognition.

Examples are due. And they will be drawn from Eric Veit and John Roebas’ exhibition with Jack Hanley Gallery, A passionate history of linguistic accomplishments, for which this text is written. Through the organic pairing of these two artists, who’ve long sought to show their work together, an epistemology proceeds, like a careful archeology, from questions surrounding the combinations of specific materials and how knowledge becomes indigenous to them. In a sculpture by Veit, a half coconut shell, replete with husk, contains a dried purple mash, intermittently gleaming with small, clear crystals; fully integrated in the mangosteen paste are inedible copal resin, salt, nettles, and termites. For another work, leather and beeswax inlaid with nigella seed affix a brass mouthpiece, as from a trumpet, to a Blesbok horn; notwithstanding its stylized display on a low, long plinth comprised of hay and a large sheet of glass, the horn is functional. As souvenirs or artifacts, both sculptures suggest a ready place in the world; and yet, with the combination of Central American copal resin and Southeast Asian mangosteen, or the South African Blesbok horn and the Eurasian nigella, accidents of geography and chronology belie Veit’s patient handiwork, taxonomy, care and balanced study  the coconut and horn’s fragrances redolent of both the traditional and the encyclopedic. Their seemingly exotic or ancient cultural origins suggest, in this context, that they are objects to be traded; it is as much a story of the transience of value as of people. And perhaps for this reason, they represent the byproducts and longings of disused trade routes and the melancholic impossibility of an art object’s authenticity even within the cultural and economic exigencies of its time.

Roebas’ paintings and clocks resonate with similar material narratives, but their greater miscegenation of the organic and inorganic disposes them to an interior reflection on the luxuriant artificiality of isolation and singularity. Laden with materials which industry seems irrelevant  IBM #95925 clock, urethane resin, rubber, imitation Calvin Klein Eternity cologne, akoya pearl oysters, vinyl, frosted glass, erased photographs, and pigment  the clocks’ faces are entirely obscured, recognizable for bureaucratic regulation by an archetype: black frame, convex glass covering, scale, and position 10 feet overhead. In fact, the materials are difficult to distinguish, and, obscured by reflections, they have one looking up and away to determine what comprises their dark, stylized shades. Perhaps what clocks of this nature suggest in the first place is the simultaneity of action; regulation determines when, not what is happening, and, like art, a historical curiosity about what else is going on. The paintings are no less a reflection of this impossible process of fossilization: the methods of their making noted in images that appear in the midst of their allover compositions  against stratification, one must take them as whole. It is a quiet perturbation of the senses by which art, like time, becomes a reading of disparate and distressed moments and materials. And, in their attempt to better know certain problems of epistemology and personal perspective, Veit and Roebas elicit from this compulsion of cogitation, that reading ever possesses the inscrutability of acting in the world. 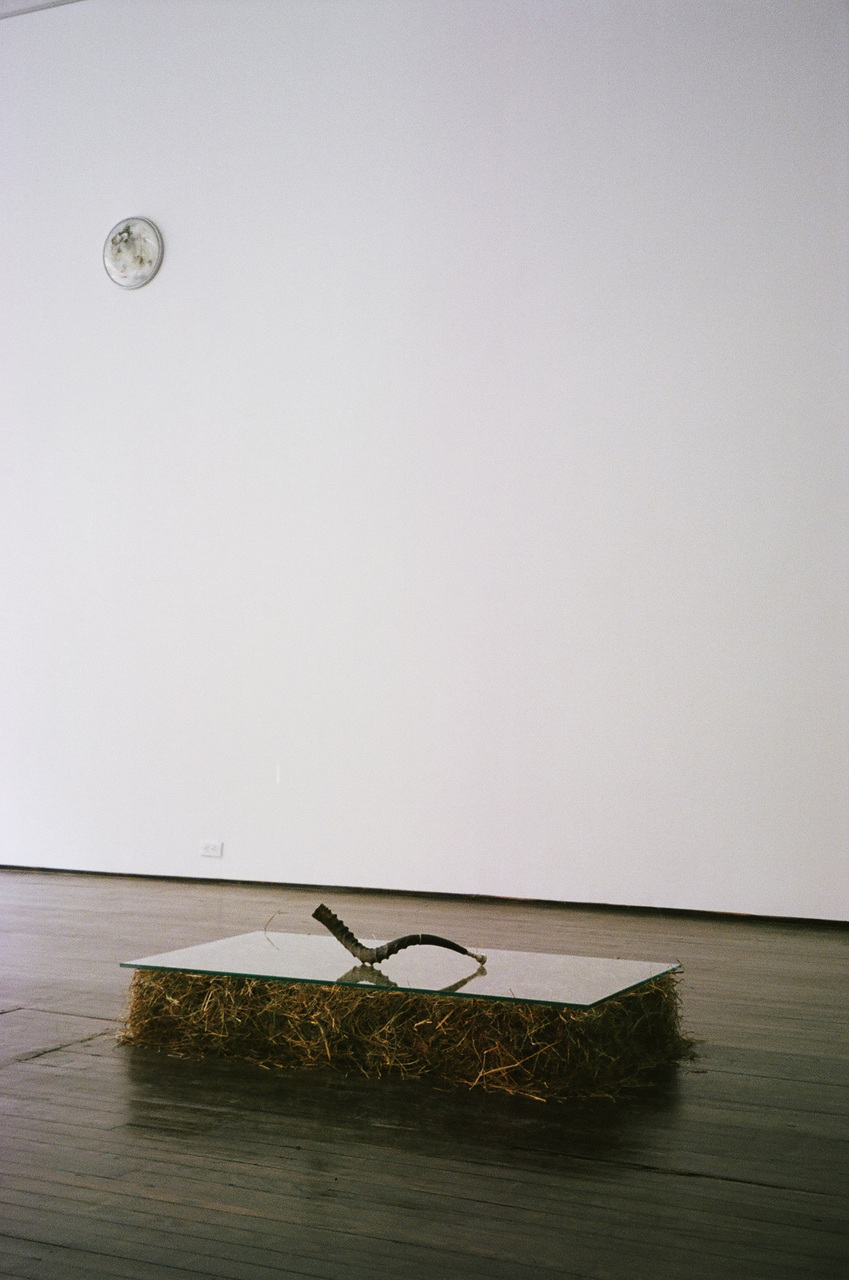 Eric Veit, Things growing are not ripe until their season, 2015