Photography: images copyright and courtesy the artist and 1857, Oslo

In America, Rubbermaid® BRUTE® containers are ubiquitous, meaning that they can be found all over the place, in malls, hospitals, parks, and prisons. For this reason they are also hard to see. Factually speaking, this is the opposite of a hallucination. A hallucination is where you see things that are not there, in this case however, you omit from vision things that are there.

Through The Woofer™, a dog coat with stereo speakers built into it, we are presented with the following image:

You enter a room. You have never been there before, but the scene is somehow familiar. There appears to be a table where the table should be, a steamer trunk where you would expect it, a grain silo, the pool, etc. When you try to look closer though, you can’t. Everything is blurry or wet, like you are drunk or like you are lost somewhere in the New Mexican desert. It appears that there is a lake in the distance.

Mary Ellen and her husband Tom are in town and we are all sharing a meal together. Over chicken and penne Mary Ellen tells me about the problems she’s having with badgers. At night they are getting into the trash. They have figured out how to lift up the lid and then leave a trail of chicken bones and kitty litter in the driveway. She called Animal Control to see if they could set traps but they told her there was nothing they could do. She decides to fill the containers with water. When the badger opens the lid he falls into the water and drowns. Mary Ellen said she got rid of more than a dozen badgers before her neighbors called Animal Control on her.

As you approach the lake, it evaporates.

I picture this dissolution as the embalming of a deity, the making of a mummy, only in reverse.

1857 is over the moon to present the first solo exhibition of Nancy Lupo in Europe, meaning that we’re intrigued and puzzled by the work at hand, and eager to let time supply us with clues. 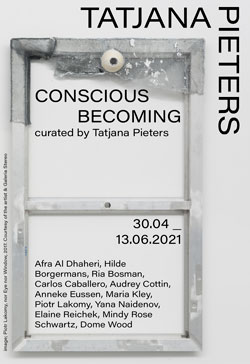