Photography: all images copyright and courtesy of the artist and Valentin, Paris

“The feelings that hurt most, the emotions that sting most, are those that are absurd – The longing for impossible things, precisely because they are impossible; nostalgia for what never was; the desire for what could have been; regret over not being someone else; dissatisfaction with the world’s existence. All these halftones of the soul’s consciousness create in us a painful landscape, an eternal sunset of what we are.”
–Fernando Pessoa

When looking at the exquisite drawings of Andrew Mania one struggles to find a word to neatly sum them up. In fact, there is a word in Portuguese, Saudade, with no comparable word in English, which seems far more appropriate than anything else. It describes a state of mind so much more precisely than any English word that I know: that deep state of nostalgic or profound melancholic longing for an absent something or someone that one loves. That longing for impossible things, for the past, for ancestral roots in another country in which one has never lived, for other possibilities, is suggested in Mania’s work, just as it is in the words of the Portuguese poet Fernando Pessoa above.

Like classical sculptures of the Greek hero / god Antinous the fresh-faced youths in Mania’s drawings are almost impossibly handsome, but unlike Antinous’ tragic likeness or Dorian Gray’s mirror, these drawings fix their subjects at a moment in time from which their real looks can only fade. Mania’s series of drawings of a friend in a pink wig taking ‘selfies’ capture that contemporary narcissistic curse of the obsession with images of the self. In the ancient Greek myth of Narcissus, the eponymous young man is so fixated upon himself that he drowns when lured to a pond that reflects his image to himself, declaring that his beauty would never be sufficiently appreciated and so he commits suicide. By turning these photographs into beautifully-rendered drawings on wood boards Mania fixes the momentary, obsessive digital image into something permanent that could last as long as a Renaissance portrait of a nobleman. He subverts and complicates not only the transitory nature of the picture, but also the narcissism, by turning it into a considered and mediated artwork.
There is a Neo-Romantic quality to Mania’s work that puts him into a tradition of draughtsmanship dating back to the 1930s, 40s and before – the work from this time by artists such as John Minton, Lucian Freud, Pavel Tchelitchew and Christian Berard. Their work was precise and yet had this same atmosphere of saudade. Nostalgia seems to be the wrong word to describe work that is so contemporary, and yet it is intangibly present in Mania’s drawings.

And also the qualities of magic realism, like the intense eyes that root his assemblage into an unsettling but playful duality of figurative and abstract. There is a sense of visual poetry that underpins Mania’s work, which is carried lightly in the assemblages just as in Joseph Cornell’s boxes. But this poetic feeling converges with the Neo-Romanticism of Mania’s drawings, and makes me think of another ancient Greek myth that was to inspire the poet John Keats: Endymion. Bestowed by Jupiter with the gift of perpetual youth, united with perpetual sleep, Endymion was beloved by Diana the Goddess of the Moon who guarded his flock of sheep whilst he slept. In the words of Thomas Bullfinch.

We see in Endymion the young poet, his fancy and his heart seeking in vain for that which can satisfy them, finding his favourite hour in the moonlight, and nursing there beneath the beams of the bright. and silent witness the melancholy and ardour which consumes him. The story suggests aspiring and poetic love, a life spent more in dreams than reality… 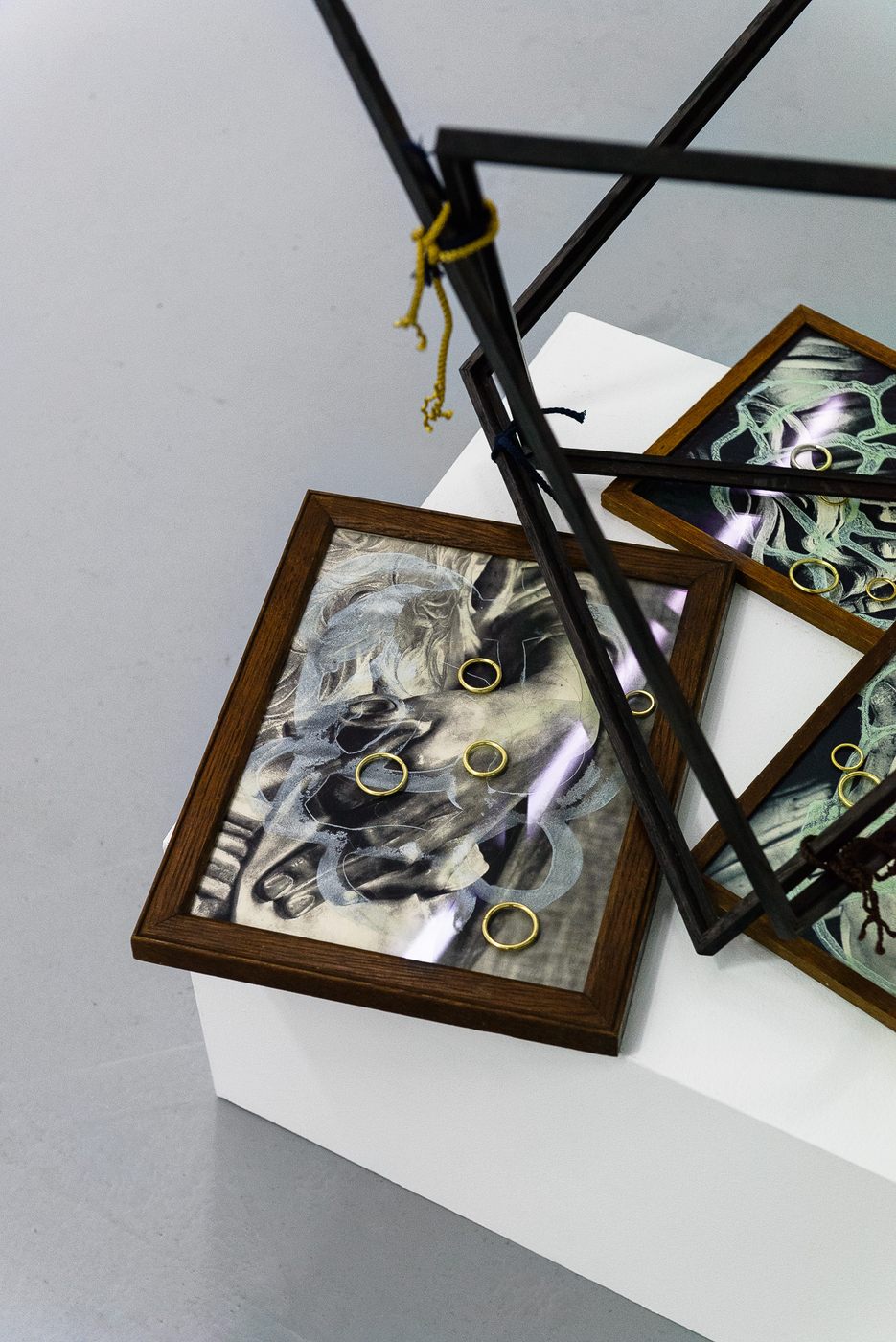