Exhibition title: Here we are again, happy as can be, all good pals and jolly good company

Photography: all images copyright and courtesy of the artist and Kunsthall Stavanger

In the largest presentation yet of Vanessa Baird’s artistic universe, the acclaimed Norwegian artist is taking over all of Kunsthall Stavanger’s six galleries. Also on view are a selection of works by artists that are close to Baird: Mette Hellenes, her friend and long-time collaborator, and her mother Maureen Baird, who has herself practised as a visual artist. A recurring theme in the exhibition is a focus on how the ongoing coronavirus pandemic has impacted Baird as her family’s breadwinner and caregiver. In the displayed works, Baird evokes the chaotic, downward spiral of domestic life.

Baird works primarily with pastels and watercolours, whilst the formats range from intimate self-portraits to larger, room-sized pieces. In these works, she references her own lived experiences, alongside Scandinavian folklore and literature. Her drawings have often been seen as controversial, as they frequently comment on political or social events of contemporary interest.

The exhibition, titled Here we are again, happy as can be, all good pals and jolly good company, marks the first time Baird takes over an entire art institution. At Kunsthall Stavanger she has been given free rein to put her artistic stamp on the whole building, allowing her to showcase her multifaceted practice.

The exhibition’s primary focus is the house in Oslo where Baird grew up and where she still lives along with her three teenaged children and her mother Maureen. The works on display in the main gallery, presented jointly under the title Behind the picket fence / I’ll be pushing up the daisies (2020–21), encapsulate the everyday chores related to taking care of a household, with Baird’s mother ever-present, and half-clothed teenagers asleep at the kitchen table with iPhones in their hands. Most of these works have been produced during the COVID-19 pandemic, at a time when we have had to withdraw from the world and when many voices have fallen silent or not been heard. The experience of home life has been given new meaning, for better or worse, and the transition has specifically impacted women’s lives. The new works by Baird also include a series of protest art produced in response to the planned shutdown of Ullevål University Hospital in Oslo, with Baird skewering the high and mighty of the healthcare sector. This is an issue that is highly personal to her, making it natural to include these works among those inspired by her everyday domestic life in Oslo.

Upon entering Kunsthall Stavanger, visitors will encounter furniture with paintings by Baird’s mother Maureen Baird. The furniture is in daily use at Vanessa and Maureen’s shared home. Maureen’s imagery includes feminist perspectives and figures in a visual idiom that is clearly reminiscent of her daughter’s art. Maureen’s presence by way of the furniture acts as an extension of the works in the main gallery, where the mother and the home are recurring motifs. Visitors are thereby confronted by the home in a physical sense as soon as they enter the building.

The work A little red coat, a pair of beautiful blue trousers and a green umbrella lost at sea (2020), which fills an entire gallery, comprises fourteen large-scale watercolours on rolls of paper, four metres high and seventeen metres long. The work brings to mind the Japanese artist Hokusai’s ink drawings of mountains and landscapes. Whilst Baird’s work is rooted in the autobiographical, here her scope widens: disturbing scenes of figures drowning in the waves might be informed by Norwegian folklore and maritime legends, but they also refer to the European refugee crisis.

The exhibition also includes Red Herring – Prednisolon ciclosporin (2014–18), a series of intimate self-portraits made over a period of four years whilst the artist was being treated for a chronic illness. These works communicate the extreme physical and emotional effects the medication had on her: Baird stares at us with a face that is severely red, or pale and virtually colourless, as she tries to convey the idea of her very self ebbing away. Each title registers the different medicines and exact dosages that caused these discomforting side effects, which imbues this series with an almost scientific quality.

Baird’s long-time friend and collaborator Mette Hellenes also presents updates from life during the pandemic through a series of drawings cut out from her diary. These drawings contrast strongly with those by Baird in that they are low-key and fragile, even as they express the pandemic-induced dreariness and anxiety of daily life and isolation.

The exhibition also features two collaborative projects by Baird and Hellenes. The first is a series of photographs from 2020, capturing the duo as they pose in a variety of situations inspired by amongst other things artworks and personalities from Norwegian culture, such as the artist Torbjørn Rødland and the art collectors Kathrine and Cecilie Fredriksen. Further, the basement gallery will screen two of Baird and Hellenes’ collaborative videos, You bad animal! Can’t you leave me alone just for one minute! and I see an angel. I think it’s you, both from 2004. The videos feature distorted versions of the two friends as they play the roles of absurd and at times insufferable characters, in stages ranging from affected politeness to bodily decadence. The works are infused with humour, and focus on the twin themes of decay and discomfort – an approach we can recognize from the individual practice of both artists.

Vanessa Baird (b. 1963) lives and works in Oslo. She studied at the Norwegian National Academy of Craft and Art Industry in Oslo 1982–85, the Royal College of Art in London 1985–87, and the Norwegian National Academy of Fine Arts in Oslo 1988–91. Her work is rife with dark, haunting allusions that often evoke fables. Baird’s intense, meticulous drawings typically take the personal and the domestic as a starting point and usually also comment on contemporary political and social situations.

In 2015 Baird won the prestigious Lorck Schive Kunstpris, one of the premier art awards for artists living and working in Norway. She also illustrated the author Karl Ove Knausgård’s novel Om høsten (Autumn, 2015). In 2017, Baird opened her solo exhibition You are something else at Kunstnernes Hus. This became one of the institution’s most popular exhibitions and was lauded by critics and curators alike as a standout event in recent Norwegian art history.

Baird is represented by OSL contemporary in Oslo.

Mette Hellenes (b. 1964) lives and works in Oslo. She studied at the Norwegian National Academy of Craft and Art Industry (1985) and the Norwegian National Academy of Fine Arts (1986–90) and works as a visual artist and cartoonist. In her practice, Hellenes addresses current social and political events and also provides intimate and diary-like glimpses into her own life.

Hellenes is above all known for Kebbelife, a satirical comic strip featuring the recurring characters Mette and Vanessa, respectively based on Hellenes herself and her colleague Vanessa Baird. Kebbelife is featured in the weekly newspaper Morgenbladet, and several collections of the strip have been published.

Hellenes received the Oslo City Art Award in 2015, the gold medal for excellence in book design in the Årets vakreste bøker competition in both 2015 and 2016, and the Comic Strip of the Year award for her collection Kebbelife: Burning Babe in 2020. Hellenes has exhibited at KODE (2018–19), Galleri F15 (2016–17), Tegnerforbundet (2010), and Kunstnernes Hus (2002). Her works have been acquired by institutions such as the National Museum of Art, Architecture and Design, Arts Council Norway, the Norwegian Ministry of Culture, and KODE.

Maureen Baird (b. 1931, Glasgow, Scotland) lives in Oslo. She graduated from the Edinburgh College of Art (1954–56) and has worked as an artist since 1960. Baird also holds a degree in psychology from the University of Oslo. Baird is known for her paintings of interiors, where furniture and textiles are stylized in an active manner inspired by domestic life. On several occasions she has also shown works where she paints directly on furniture. Her art frequently explores the concept of the domestic and addresses issues related to women.

Throughout her career, Baird has been actively involved in political issues. She has fought for better rights for sick children and for the extension of visiting hours at hospitals and health institutions since the 1960s. Her political engagement is also visible in her artworks. She has exhibited her works in Norway since the 1980s. 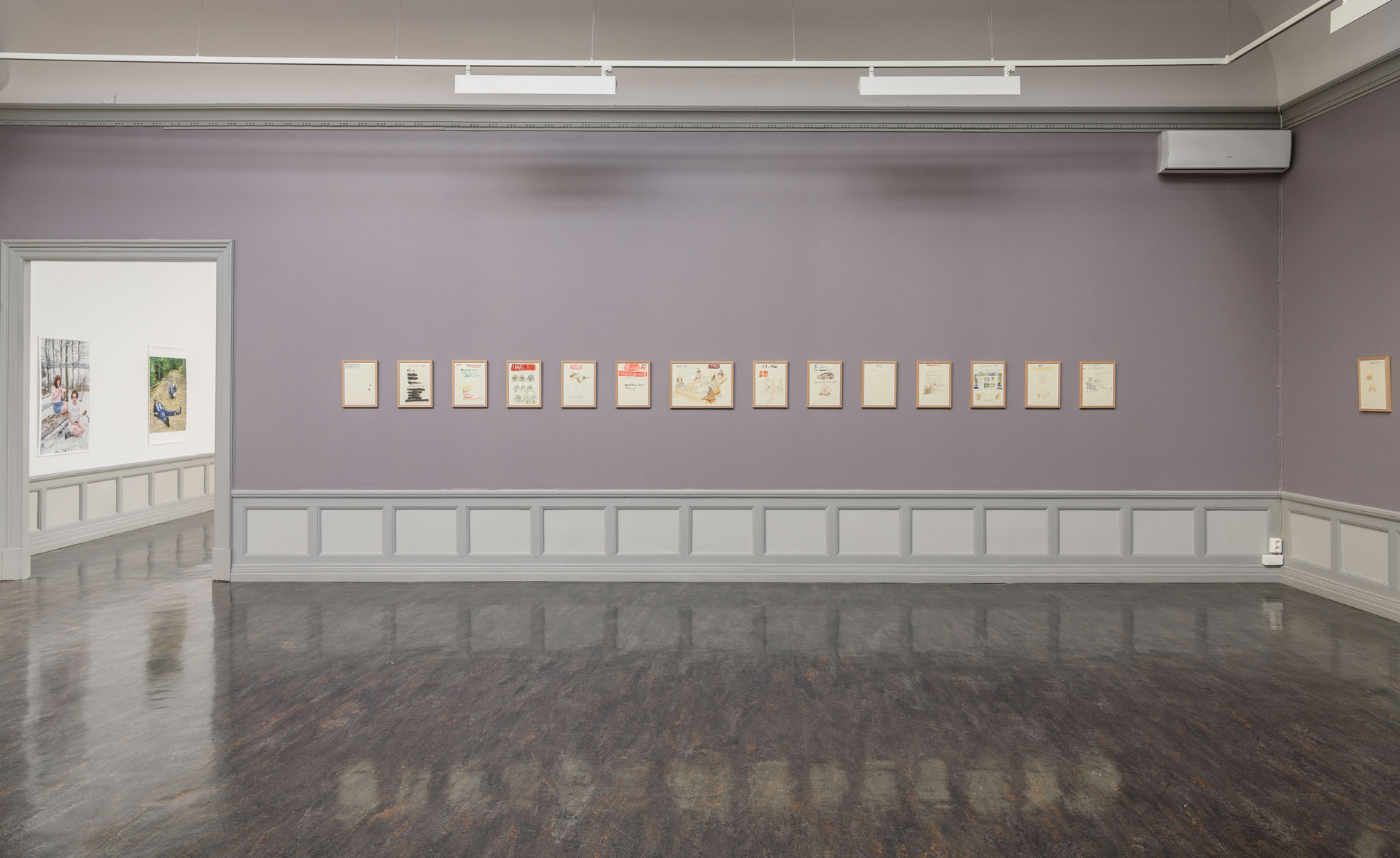