Photography: Patrick López Jaimes and Rodrigo Viñas, all images copyright and courtesy of the artist and Proyectos Monclova, Mexico City

An authoritative critic and intellectual of the New York contemporary art scene, for fifty years Morgan has maintained a dedicated studio practice in parallel to his writing. His work has been shown at the Whitney Museum of American Art (1976) and has been included in exhibitions by seminal curators including Lucy Lippard at Printed Matter (1984) and Helene Winer at Artists Space (1977).

The exhibition, Robert C. Morgan: Concept and Painting, will offer a historical overview of pieces made throughout Morgan’s career. Selected works include drawings, paintings, and photographic documentation of performances from the 1960’s to today.

Since 1970, Morgan has devoted his focus to testing the limits of abstraction to explore the potential for geometric form to suggest space and depth within a picture plane. His architectonic approach utilizes a deliberately restrained scale and a limited color pallet to enhance the viewer’s awareness of the interplay between compositional elements as well as the sense of space suggested by the reflection vs. absorption of light by his canvas’s pigments.

Morgan holds an MFA in Sculpture from the University of Massachusetts, Amherst (1975), and a Ph.D. in contemporary art history and aesthetics from the School of Education, New York University (1978). Dr. Morgan lives in New York, where he lectures at the School of Visual Arts and Pratt Institute. He is Professor Emeritus in Art History from the Rochester Institute of Technology, and, since 2011, a member of the European Academy of Sciences and Arts in Salzburg.

Throughout his fifty-year career Robert C. Morgan has been lauded as an author, lecturer, curator, and art historian. For decades he has maintained a rigorous studio practice in parallel to writing, showing his work in exhibitions at the Whitney Museum of American Art (1976), White Columns (1987), and the 49th Venice Biennial (1999) to name a few. Despite these lofty achievements, his acclaimed reputation as a writer preceded his other modes of production. At PROYECTOSMONCLOVA, the exhibition Robert C. Morgan: Concept and Painting highlights Morgan’s vibrant artistic achievements through a survey of his dedicated studio output.

Morgan is an undisputed authority on conceptual art, having written numerous books and countless articles on the subject. Yet in his studio he consciously sets aside predetermined methodologies that cast the artist as a researcher whose creative efforts require the support of an index of footnotes to be fully revealed. Instead he favors an approach to art-making that prioritizes the notion of what exists between concept and painting to inspire in the viewer an elucidatory moment of intrapersonal profundity.

The pieces on view draw from a range of media – among them documentation from Morgan’s early body performances, calligraphy, drawing and collage. Despite the differences in media, these works all exemplify an approach to painting where the forms seem to vibrate in living stillness. In his hard-edge geometric abstraction Morgan tunes in to the longing for spirituality hidden by the feedback loop of distraction that characterizes the present day.

Philosophical ruminations on presence, absence, space, gesture and organizational hierarchies take center stage in Morgan’s paintings and drawings, which operate with a strict focus. Their unwavering austerity demands that viewers confront and reexamine preconceived notions about what they assume contemporary art today to be (much less do). He highlights the values, priorities, and distractions that constitute post-internet space and social constructs by refusing to assume a reactionary position to them. Thus, he draws a parallel between space in painting and architectonic, psychological or even metaphorical space as construct rather than axiomatic.

Taking root in both western and eastern traditions, including phenomenology and Taoism, the interplay between presence and absence, reflection and absorption, in Morgan’s work suggests that dualistic forces are complementary aspects of the same thing, unified rather than opposed. For example, though he is committed to a practice of abstraction, the body isn’t dismissed. There is a subtle intimacy to be found in the scale of his paintings and drawings, which is deliberately chosen to reflect the concept of the body in space; his performances from the early 1970s highlight and reflect the corporeal forces and movements that constitute his forms. While the early calligraphy pieces are predicated on gesture – as the form demands – the geometric series seek to paint the space of a gesture. 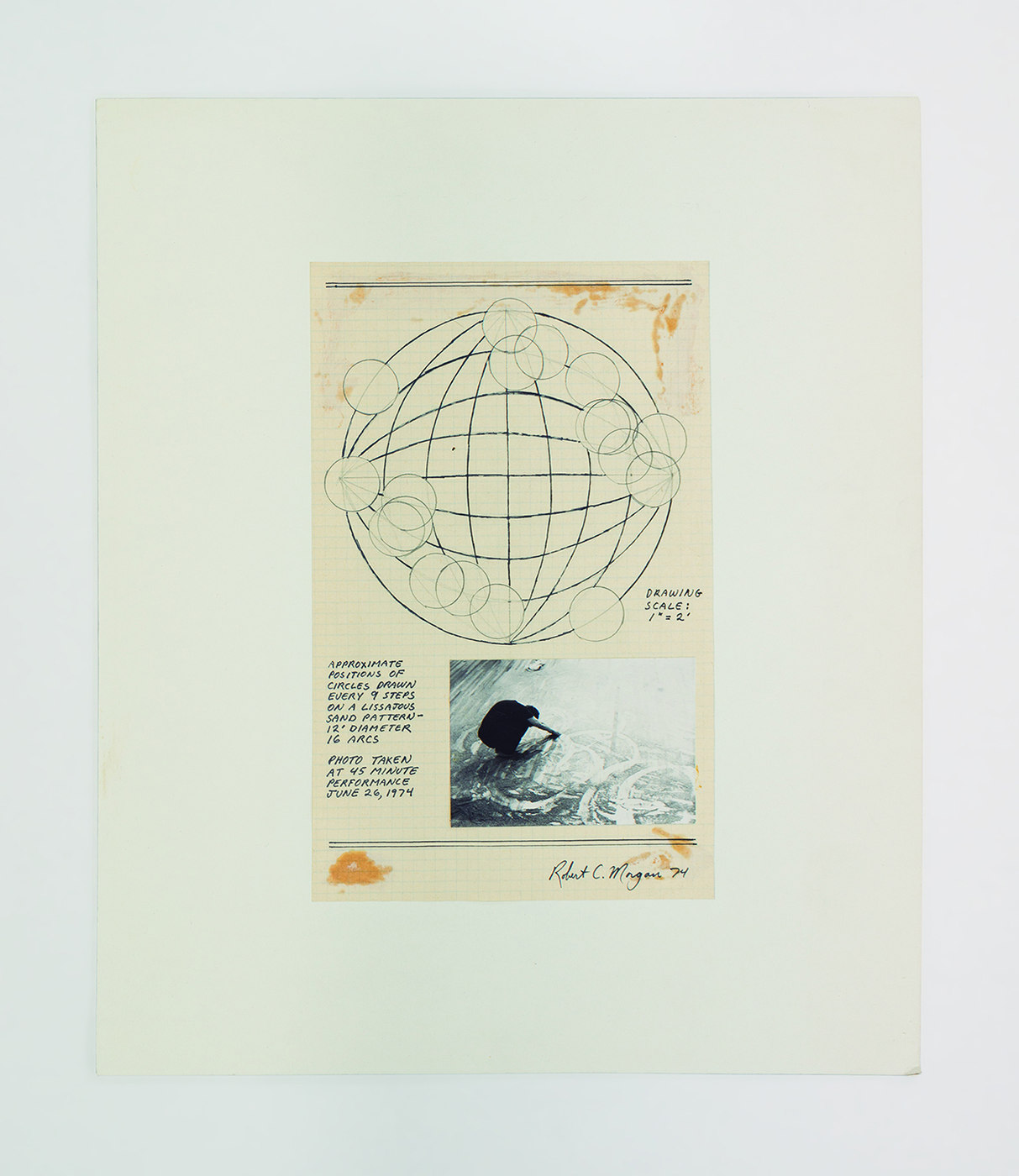